Philipines Government encourages the ratification of Ilo 188 and STCW-F

The Philippine government officers were present on the agenda of South East Asia / East Asia Regional Conference on Ethical Recruitment and Policy Harmonization in Fishing Industry
National Assembly of Republic of Korea, 25-26 August 2016. 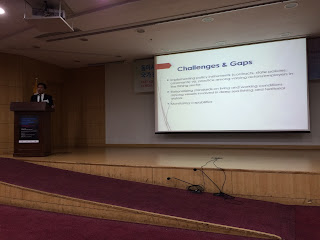 On their session, Philippines Government was presented on Migration System in Philippine. As we know the Philippines is also a sending country of migrant workers. They also have good rules in terms of governance of migration to the division of tasks, functions and inter-institutional coordination. Nevertheless it is still considered insufficient to protect their migrant workers wh
o work abroad, especially for those working Workers at Fishing Vessel.

At the session of presentation, John Rio Bautista, POEA stated that the Philippines will push to ratify ILO 188 and the STCW-F. Then he also describes the challenges faced by the Philippine government in implementing policy instruments, nationalized the living standards and working conditions on board, including in the deep sea and territorial sea. 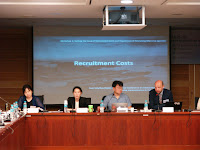 During this time the Philippines has a practice such costs are borne entirely shipowner. Earlier, the government survey in advance to see the state of Labor. Eg ships that will operate in coastal areas, both in trading and fishing boats. Then the costs associated with the recruitment and placement of Filipino crew borne by the shipowner. 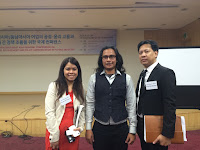 Rizky added that "If you want to make the protection of Indonesians Seafares who work on foreign vessels, the Indonesian government should immediately make rules regarding the protection of them, with a note of this rule has been agreed between the institutions in Indonesia. It is intended that does not happen again overlapping regulations or disharmony regulations issued or could the government to ratify ILO Convention 188 or the effort to adopt the rules in ILO Convention 188 view of the factors the needs of society and also the urgency regarding the protection Indonesian Seafares
at this time ". 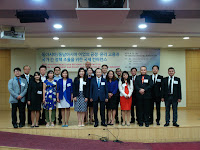 Il-pyo Hong, Chairman National Assembly Human Rights Forum which opened the event were delighted and declared "Protection of Human Rights for Migrant Worker who working on Korean Fishing Vessel should be the main thing and the sending countries should understand the rights of protection for workers sent to another country". 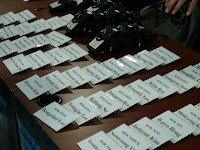 Then the event continued by the presentation of Mihyung Park, IOM Seoul. in her presentation she's said
"that recruitment tends exploitative, often unethical and unfair. Foreign seafarers are in exploitative situations such as low wages and high recruitment fees caused by discrimination and unlawful recruitment practices.

It is important for us to make a clear and measurable framework to promote the establishment of good recruitment practice, through the policy discussions between the Government of Korea and the sending countries seafarers, in order to protect the most vulnerable". 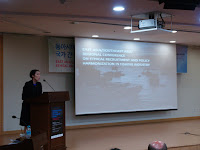 Grace Yoo, U.S Embassy mentioned about "Vietnam, Philippines, and Indonesia as a sending country, should make the rules that protect workers. We live in a world where slavery became a frightening phenomenon included in the fishing industry. Forced labor in the fishing industry must be eradicated".
IOM Cambodia, Max Pottler : " International Standard on Fair Recruitment and Policy Harmonization for Migrant Seafarers such as; Coordination of Migrant seafarers policies and labor standards on ethics need to be harmonized, recruitment of unfair and ethics are things that contribute to make forced labor. In fact Fish commodity to be traded. The data showed 57 million tonnes of fish are exported in 2010. 38 million people are employed in capture fisheries (guaranteeing livelihoods 660-820 million people) but forced labor and human trafficking occurs in many places in the fishing industry. They live in remote areas for a long time, a written employment contract also seldom have, their identities are often detained". 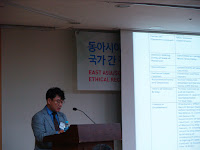 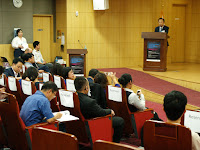 And Indonesian Ministry of Transportation, Capt. Richard Christian mentioned on his presentation about "Indonesian National Legislation related to the Protection of Seafarers: Minister of Transportation regulations No. 84/2013 on the Recruitment and Placement Crew,Director General Regulation others. Measures to enhance protection of seafarers: Harmonization of regulation, coordination between institutions (Foreign Minister, Minister of Commerce in Taiwan). The procedures for working-on-board: Terms of age, certificate, medical Certificate, mustered. Strategy: inspection documents, company certification, coordination with seafarers union". And his presentation got responded from SBMI ; "in 2013 after the Minister of Transportation regulations No. 84/2013 legalized SBMI in 2013, SBMI has tried these rules but unfortunately these rules do not cover the protection of crews of fishing vessels. Then SBMI also asked sanction mechanism if there are agencies that violate these rules is like?. and Capt. Richard said it will revoke permission for any recruitment agencies that violate these rules. when in fact there are many recruitment agencies have a fishing boat crew recruiting and crew to be dispatched to work in foreign-flagged fishing vessels. SBMI then added, so that countries that were present in this discussion may soon ratify the ILO Convention 188; Work in Fishing. because we think the existing rules in the convention very clearly regulate and protect the crew every crew on fishing boats and also regulate the rights and obligations of the parties involved such as; agency and the crews of fishing vessels.

At the end Korean Ministry of Fisheries, Haegi Kim said  "human rights violations to criminal penalties are accommodated in the Act, providing training on human rights violations to seafarers Korea, the number of complaints (call center) to the crew migrants have been created and operated, increasing the role of the embassy, the increased role of inspector personnel seafarers, improved management system for recruitment seafarers Migrants , the adoption of a comprehensive evaluation of the manning agencies, discuss collaborative efforts with sending countries through the signing of the MOU, the spread of a standard employment contract for, facilitating feasibility and other salaries, training for national seafarers / migrants".